THIS YEAR, THE RESORT IS CELEBRATING ITS 60TH ANNIVERSARY

Dive into the unique world of artist Lucas Beaufort as you learn about the history of La Rosière.

Everyone loves a good story! French artist Lucas Beaufort tells the story of La Rosière through a series of period photos. The pictures have been restyled by the artist, who has adorned them with his famous mischievous and intrepid characters.

These characters pop up in photos taken in La Rosière over the years, as though they had travelled in a time machine.
Designed to bring people together, the “Storytelling” exhibition is for all generations. Older locals and visitors will be delighted to see the resort as they once knew it, and the younger generations will love spotting the funny and sweet characters in photos of times gone by.

Ten of the artist’s unique pieces are displayed across the resort and the ski area. Locate them and scan each QR code for  find some information to be able to reply to qn online questionnaire, and get a chance to win some fantastic 60th anniversary goodies! 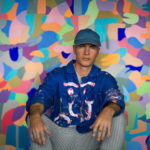 Born in Cannes on 29th May 1981, Lucas Beaufort is a French visionary artist-painter living in a world surrounded by imaginary characters, kind but mischievous monsters, who help him shine some positivity on the world and who guide his choices every day.
A true philanthropist, Lucas Beaufort is passionate about travelling and is motivated by the people he meets.
For the last ten years, he has travelled all over the globe. He has painted murals in a number of prestigious hotels and restaurants, and has collaborated with brands such as Vans, ASOS, K-Way, Virgin Atlantic, Billabong, Pernod-Ricard and more.

Gus Gus is Lucas’ most iconic character, found buried in the depths of his dreams and sometimes even his nightmares. He had always imagined Gus Gus to be big, with long arms and a little bird-like beak, which makes him look both funny and irresistible.
He drew Gus Gus for the first time in 2010 and would never have imagined that this character would become his best friend, his travel buddy, his confidant.
The strangest thing is that his nightmares went away as soon as he had committed Gus Gus to paper, as if by magic.
This character is extremely sweet. Curious and soft-hearted, he sprinkles the world with love and delight